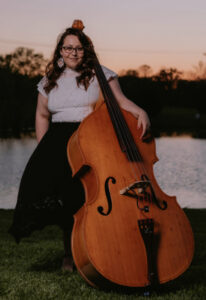 Originally residing on a cattle ranch in Eastern Montana, Katelyn moved to Nashville in 2019 to pursue her dream as a professional musician. She grew up playing in the family band with her parents and two older brothers, which transitioned into 26 years of building the legendary Montana Fiddle Camp. Katelyn is known for her powerful vocals and soulful work on bass but also holds 2 Montana State Fiddle Championships.

Even though she works full time in real estate accounting, Katelyn can be seen performing at the Station Inn or as an opening act at the Ryman Auditorium. She currently plays with the Jim Hurst Band, as well as her own headlining band, the Katelyn Buckley Band. Katelyn is also proud to be featured as a vocalist on Greg Blake’s upcoming duet “Not Far From Hope”.