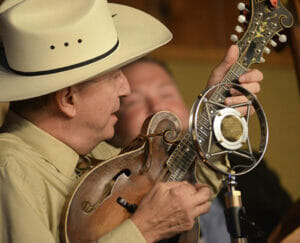 My dad’s older brother was Cleo Davis, bluegrass music’s original Blue Grass Boy. My dad, Leddell Davis, was a very good musician and singer. I grew up singing with my dad — mostly the songs of the Monroe Brothers, the Blue Sky Boys, Cowboy Copas, Ernest Tubb and Roy Acuff. The first records I owned were by the Carter Family, Jimmie Rodgers and Bill Monroe.

Growing up, I learned a capella “parts singing” by chiming in with the church congregation. We visited some of the churches on neighboring Sand Mountain, where I first got to hear fa-so-la singing — from the shape note tradition which was just about the prettiest, eeriest, and moving vocal harmonies I’d ever heard. The Louvins grew up there. I once told Charlie Louvin that our family attended services in several Henager, and Ider, Alabama area churches and that we knew a lot of his kinfolk. He replied, “Well, you know where we got our music from.”

Dad and Mom took me to see Bill Monroe and the Blue Grass Boys when I was twelve. We sat within a few feet of the stage and proceeded to enjoy musical steak that night. I experienced what I’ve read that a young Levon Helm experienced twenty years earlier when he saw the Blue Grass Boys in his hometown of Marvel, Arkansas. Levon went home wanting to be a musician and so did I.

It’s amazing to think how many people’s interest in music grew from the seeds Bill Monroe sowed. The best of them combined the essence of Bill’s music with their own influences to create music with a new face, much as Monroe did years earlier. So I left my first Bill Monroe show wanting to do what Bill did, and to make people feel the way that Bill’s music made me feel. Later on, the challenge for the band came in learning to sing and play Monroe’s music proficiently, which was an exciting, but daunting, task.

I believe that Bill Monroe genuinely appreciated artists who tried their best to play his music as close to the Monroe Doctrine as possible. But he would be the first to say that you’ve got to make the music your own. After starting our relationship with the Rounder Family, one of the first pieces of advice that Ken gave us was, “You have a great Bill Monroe thing going; now you should work at creating your own identity.” That was hard to understand at that time in our musical development — kind of a curve ball to the youngsters who prided themselves at playing Bill’s style so faithfully. Over time we came to learn that creating your own sound is the most rewarding part of being a musician.

As Bill Monroe said, “You have to know how far you want to go with it and where to stop.” He accomplished this monumental task and his fans were rewarded greatly by the effort. Now the evolutionary task has come for a new generation of artists to accept the challenge Bill gave us.

The future is in the roots. By going back in time, we move forward, growing those roots into a magical potion of ingredients old and new.