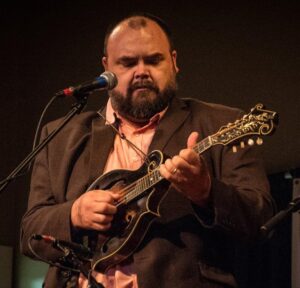 John Keith was born in Parkersburg, WV and raised just up and across the Ohio River in Newport, OH. He and his wife, Tina, now live near Cambridge, OH. where John is a full-time minister for the Church of Christ.

He began playing guitar when he was nine, and ached for an electric guitar so he could become the next big rock star. One evening in 1981, his dad and mom dragged him to Eureka, WV, to hear his older cousin and some of his buddies play something called “Bluegrass.” He was hooked!

Soon he was buying any Bluegrass record he could find. It wasn’t long until the banjo became a fascination, so his dad bought him an Epiphone to start with. There were several banjo players in the area, and it seemed he always ended up with the guitar. One day a few years later he was listening to the Bill Monroe record, Bluegrass Time, and decided he wanted—needed—a mandolin. After an ordeal he can tell you about himself, his dad bought him one in the fall of 1986.

So then, in his senior year of high school he began listening and studying Bill Monroe, and others who played like him, and in July of 1990 he was hired by Melvin Goins to fill a recent vacancy. It was during this time that he met Mike Compton and became even more determined to play those old sounds. He dabbled with other styles as well but always came home to Monroe.

After the passing of Ray Goins, John took over the tenor vocals with Melvin, and did his best to do what was needed for the show. He recorded three CD’s and a live video while with Melvin. It was during this time that he was afforded the opportunity to hang around with Mr. Monroe, and among his treasured possessions is a personal video of a couple duets he sang with him at Bean Blossom. Also, a precious memory of an impromptu set with Mr. Monroe at the Long Hollow Jamboree—Bill sang and insisted that John play the mandolin.

Perhaps, the last live music that Bill Monroe ever heard was the Goins Brothers Band standing outside his window at the rehabilitation facility where he spent his last days, playing his songs with John’s Monroe-style mandolin punctuating every line.

After leaving the road early in 1998 he went to work as a millwright, but continued to play locally. However, it was not long until he decided he couldn’t do without it. So with renewed interest, he began pickin’ and studying the master again. John has done studio work for several of the local and regional groups in his area, and people know they can always count on John for some “straight old Monroe style mandolin” when he’s around. He plays mostly for enjoyment, but when Monroe sounds are heard in the Mid-Ohio Valley, it’s usually John Keith behind them. 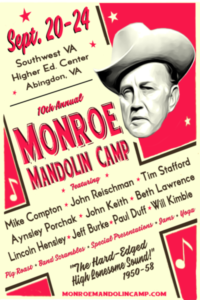