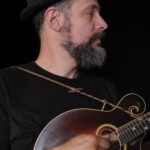 By 13 Adam began his obsession with the mandolin, and specifically the Monroe style.

Inspired by live performances of Monroe and The Bluegrass Boys in California, Adam bought all the recordings of them available. He slowed the records down on his turntable in hope of catching all he details of Bill’s style.

Frank Wakefield also lived in the Bay Area at the time, and was also a huge influence.

In his 20’s Adam devoted much of time to playing and studying old time fiddle music and the styles of various players of the Southeastern United States.

Adam’s approach to mandolin and fiddle playing reflects the diversity of rural music heard on 78rpm discs made prior to Monroe’s recorded debut, as well as field recordings from various sources.

Adam has toured in both the United States and Europe over the last 15 years as a member of The Crooked Jades, The Hunger Mountain Boys and The Twilite Broadcasters.

For the last 10 years Adam has been on staff at The Swannanoa Gathering and Mars Hill College in Western North Carolina teaching old time fiddle mandolin and guitar.